Supporter Groups: Who are they and why do they exist?

Have you ever wondered who those loud, committed, diehard group of fans are at every soccer match? Often times singing, yelling, playing instruments, waving flags, sometimes lighting flairs and wearing scarves.

It’s a good chance they are part of a supporter group!

Supporter Groups have existed for decades. All around the world, they have been linked to local clubs and globally recognized clubs alike. In many cases, you will find supporter groups in one city that are for a club in another country (especially with the big names like Barcelona or Manchester United).

While no one can pinpoint which one existed first, supporter groups (which are also called Ultras in some countries) can be linked back to Brazil during the 1930’s.

Supporter groups are the lifeblood of their teams and organizations.  They provide energy and support as they passionately cheer on their team, dressing themselves in custom apparel and showing allegiance to their crew.

One great example are the Sons of Ben. The Sons of Ben came about before their club ever existed. It was their passion and commitment to the beautiful game that led to their city birthing a franchise. That is powerful. (You can check out more of their story here)

Or how about the March to the Match held in Seattle before each of the Sounders home games! 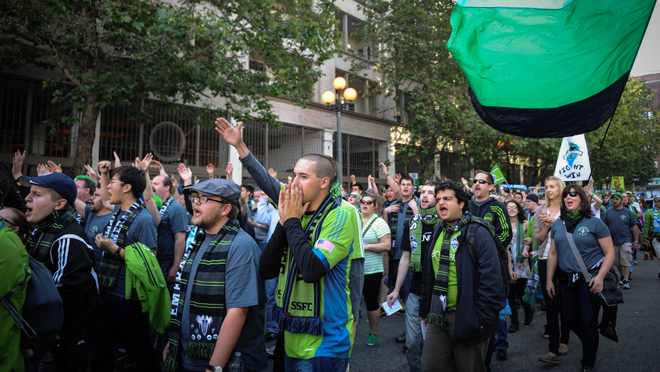 The Seattle Sounders supporters have made this a game day ritual. They congregate together at a local park down the street from the stadium and all walk in together. Talk about being noticed! (You can learn more about this tradition here)

With supporter groups being the lifeblood of an organization, many of them are also connected to Philanthropic work in their communities. Many times you will see supporter groups partnering with local organizations to help meet the needs in that community. An example of this is the Manchester United Supporters group in Chicago. They partner with Top Soccer in their city and sponsor the “Little Red Devils,” a charity that enables children facing any developmental or physical challenge an opportunity to play soccer. (You can learn more about their work here)

It might be surprising, but it’s very common for more than one supporters group to exist for a team. I remember going to a MLS match this past year and seeing over four supporter groups represented throughout the stadium.

Supporter groups usually align themselves based on:

Despite the different names, looks, and characteristics that make supporter groups unique, their goal is the same. To ignite a movement of bold, committed and loyal followers of the club.

How to Find One

Interested in a finding a supporters group near you? Check out the links below to see which one might be a good fit for you.