There’s a lot that goes into running a supporter group. From recruiting members, organizing meetups, getting your gear (we have you covered there with scarves, beanies, socks, and t-shirts), and a long list of others, there is a lot to manage. The Third Rail is one such supporter group that makes it look easy. That’s why we had to pick their brains and learn more.

Check out our interview below.

First off, who is The Third Rail?

The Third Rail is the first recognized independent Supporters Group for New York City FC. We are a group of fans from all over the city (and the world) who come together to have fun, play soccer, raise money for good causes, and support the first Major League Soccer club to play in our great city.

We recognize May 21, 2013 as our founding day, the same day that New York City FC was announced as the 20th club in Major League Soccer, and prospective fans took to Twitter, Facebook and blogs to share their excitement. Known at the time as “New York City FC Supporters Group”, it began as a loosely-knit group interacting first on social media, then increasingly in public meet-ups, pub crawls and other events. Members of our group were present for the NYCFC logo unveiling event, the announcement that Yankee Stadium would be its first home, and other seminal events in the young club’s history.

Where is your HQ?

We don’t have a specific HQ, we’re located all around the city. Board members live everywhere from Manhattan to Brooklyn to suburbs of NYC. If we had to choose a headquarters, it would be sections 236 and 237 in Yankee Stadium at NYCFC matches.

Where did your name come from?

The name was chosen by a public vote of New York City FC fans on May 21st, 2014. It refers to the method of powering trains used by the New York City subway system, where the trains’ wheels run on two parallel tracks and an electrified third rail running alongside provides the power.

The name has assumed the popular connotation of something powerful, even dangerous—controversial issues are often referred to as “the third rail of American politics”—but we are mostly interested in what the term means to New York. From the New York Subway to Metro-North to the Long Island Rail Road, the transit system is the lifeblood of our 24-hour city. These trains make our city possible, brings us all together, and all the while the third rail provides the power.

We want to be the electricity that powers New York City FC, from the organization to the players on the pitch.

What is your group’s game day look? Any custom gear?

It’s all about the Blue. You’ll see lots and lots of blue with orange hues present, too. We’ll be unleashing a new line of Third Rail gear soon. Until then, you can find a preview on Instagram at electric_city.

Where can someone find out about you online? 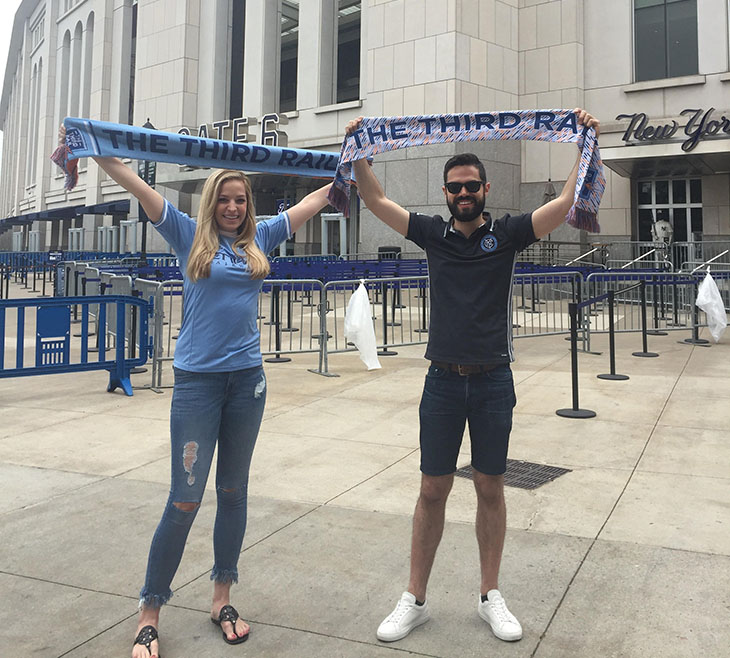 Does your section have a name? Do you share the section with others?

We sit in sections 236 and 237 at Yankee Stadium right behind the the goal on one side. Yankee fans will know it as the left field beachers. As for section, no specific name but we do share it with other supporters.

We have tons of favorites, but the one that has started to make its way across the entire stadium is “Come On, New York,” it’s simple, loud and supports the greatest city in the world.

What is the best food at the game?

The fan favorite is the chicken bucket. A $20 souvenir bucket of chicken tenders and fries. It’s the one food that warrants its own chants at the stadium.

If you can’t make it to the game, where can you meet? Do you have game watch parties?

For away matches, we meet at St. Pat’s Pub in Manhattan. We pack the second floor, which includes an awesome outdoor patio. Members enjoy deals on food and beer (often times free beer happy hours leading up to the game). There’s also a DJ and prizes given away like match tickets and passes to City Send Offs, where members can meet players. Last year, at the end of the season, Patrick Vieira, David Villa, Andoni Iraola, and RJ Allen came by our viewing party bar for an end of year party.

We host bus trips to certain matches if close enough. We’ve already taken bus trips to Philly and DC earlier this year. But outside of that, our members are willing to go all over. We sent a ton to Orlando to start the season and even have a group headed to Dallas next weekend for that match, where we’ll even join a group of their supporters for a community service project.

What is the greatest game in NYCFC history?

This is a tough one and every member would probably give you a different answer here. Some might say our first ever home match. Since it was so recent, most of us were there for it and remember it quite well. A 2-0 win over New England. Some could say our one and only win against the Red Bulls. Some could say one of the many away matches they’ve attended, as those are often an incredible experience on their own.

What makes you guys one of the best groups in MLS?

The nature of New York City makes us one of the best supporters groups in the league. Nowhere else do you have such a diverse group of people from so many different walks of life. You get the opportunity to meet, drink with, sing with, people you never would’ve crossed paths with in your everyday life and that makes the match day experience extremely special. 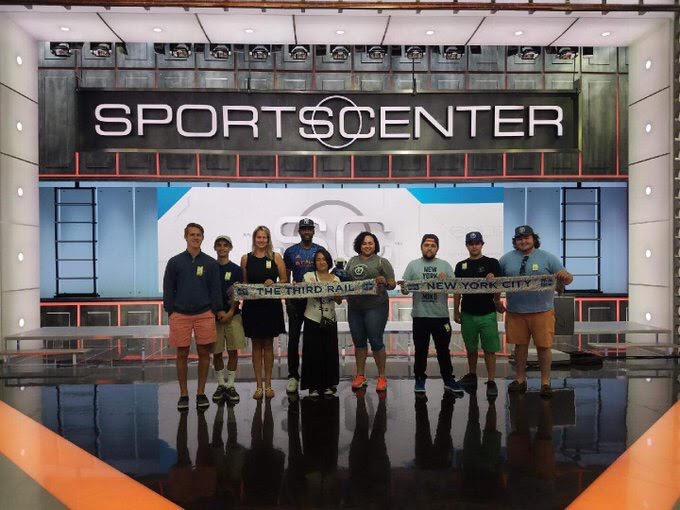