Professional soccer (or football, as our friends from across the pond would say) is a sport like no other. The game has been called the most popular sport in the world, which in turn attracts a diverse crowd and relentless competition to every game. If you’ve been to a professional soccer game, you’ve likely seen all sorts of soccer fans in action, the good, the bad, and the ugly. We’ve crafted a formula that organizes every type of fan into a category:

Check out our list of fans we love, and the fans we love to hate, in no particular order.

Ahh, our loyal, dedicated, and just a tad bit dramatic Diehard fan. One telltale sign you’ve encountered the Diehard? Head to toe swag, repping the team’s colors. They can tell you everything you need to know about their team, and even some stuff you didn’t. Prepare to get quizzed on team trivia in their attempt to oust you as a bandwagoner.

You’ve probably heard the Diehard mutter the words “I’ve been a fan since the womb,” and they most definitely have a poster of their favorite player hanging above their bed. Can you blame them? They’ve been fans since before they were born! 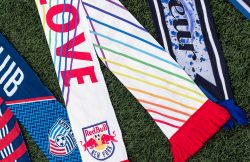 Your team. Your logo. Your colors. Create completely customized scarves with help from our experienced designers today.

It’s funny, isn’t it? We thought the coach was supposed to be on the bench next to the players. Turns out, there are tons of coaches taking over the stands!

While we like to joke about these fans, we can only wonder… do they really think the players can hear them shouting directions from the grandstand? These fans know everything there is to know about the sport, and aren’t afraid to show it. Yelling at athletes is just the beginning. Critiquing plays and scolding referees are their bread and butter. If you get stuck next to the Coach in the stands, just try to ignore their colorful language and questionable coaching decisions.

Did your team win a championship and see a huge increase in game attendance? Welcome to the club, bandwagoners.

When they’re up, they’re up, and when they’re down, well… you know the ones I’m talking about. A crazy goal will have them crowd surfing through the stands and leading stadium wide chants. A tough loss, on the other hand,  will lead to one thing, and one thing only. Excuses. “The refs are blind!” “This game is rigged!” “That would’ve been a goal if it wasn’t for that sudden gust of wind!” There’s no end to what they’ll come up with.

Step Up. Look Good. Cheer on. 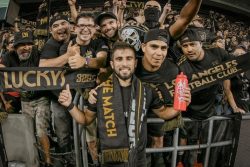 You know ‘em when you see ‘em. These are the locals that never fail to show up on game day. They probably wear a ridiculous costume or paint their faces, and have made it on the local news more times than you can count. They’ve earned their title as the team’s unofficial mascot, and are better at revving up the crowd than anyone else in attendance. These are Local Legends.

Everyone’s favorite fans… the little leaguers! Swarms of kids might be difficult to navigate through when balancing your hot pretzel and 24oz beer (no judgement), but it’s always a heartwarming sight to see the little tykes on the field with the players. It’s also a subtle reminder of your first time visiting a big stadium as a kid, with pure enthusiasm and probably an intense sugar high. I’m not crying, you are.

Last, but certainly not least, the Hooligans. These are the people that would give their lives for their team, starting all-out brawls with opposing fans and singing their battle cry for all to hear. They are not a force to be reckoned with, so if you’re wearing rival colors, you’re better off steering clear. Unless, you know, rioting is your thing.

Share your soccer fandom with the world by designing custom apparel today!